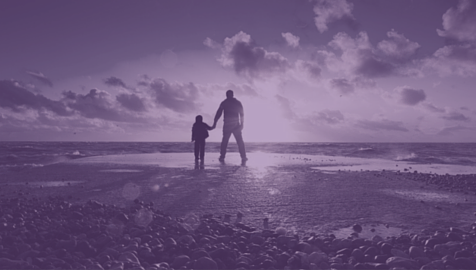 Growing Up With God

Last week we explored the nature of God as our Heavenly Father—and how we should approach Him in prayer as His beloved children.

Yet once the revelation of God as Daddy and Father begins to sink into our awareness, the next thing we need to realize about prayer is that we have some growing up to do!

As children we must not be childish in how we communicate with God.

As we mature and grow up—both in the world and also spiritually—we continually learn how to communicate more effectively.

We learn that “talking at” someone we love is not as effective as “talking with” them. We learn that a meaningful conversation involves intentional interactive dialogue.

Prayer is less about reciting lists of needs or pages of memorized Scriptures, and more about two-way communication.

Would you approach your dad with a pre-scripted conversation?

Now I’m not saying prewritten prayers are bad—I have written many such prayers and confessions and find them reassuring, positive, and transformational.

Repeating scripted prayers and confessions are wonderful ways to reset our hearts about who God is and what He really wants for us.

However, this is only one of many keys to unlocking the storehouses of heaven—it is not all that prayer is about.

As we mature spiritually, so does how we pray. Prayer becomes a two-way conversation where we are as much, if not more, interested in receiving from God’s heart as in sharing or professing what’s on our heart.

In fact, for us to grow up and mature at all, we must actively seek His wisdom.

Look at the book of Proverbs. These Scriptures are written from a father’s heart to his son—filled with instructions for how to grow up and live a successful life by pursuing God’s wisdom.

My son, do not forget my teaching…

Blessed is the one who finds wisdom,
and the one who gets understanding,
for the gain from her is better than gain from silver
and her profit better than gold.
She is more precious than jewels,
and nothing you desire can compare with her.
Long life is in her right hand;
in her left hand are riches and honor.
Her ways are ways of pleasantness,
and all her paths are peace.
She is a tree of life to those who lay hold of her;
those who hold her fast are called blessed.

My son, do not lose sight of these—
keep sound wisdom and discretion,
and they will be life for your soul
and adornment for your neck.
Then you will walk on your way securely,
and your foot will not stumble.
Proverbs 3:1, 13-18, 21-23

Prayer is not only asking your heavenly Father for something, but it is also asking about something and then receiving His wise answer. It is a conversation.

Yet, in order for that conversation to take place, our spiritual ears must mature enough for us to discern God’s voice from all of the others that speak into our heads and our lives.

There is more to prayer than most people think.

We must first do work within ourselves in order to become mature enough to talk to our Father as a Friend and Mentor.

We must consecrate our hearts and our lives to not only be able to hear what our Father has to say, but to be willing to obey what we hear.

“If you need wisdom, ask our generous God, and he will give it to you. He will not rebuke you for asking. But when you ask him, be sure that your faith is in God alone. Do not waver, for a person with divided loyalty is as unsettled as a wave of the sea that is blown and tossed by the wind. Such people should not expect to receive anything from the Lord. Their loyalty is divided between God and the world, and they are unstable in everything they do.” (James 1:5-8 NLT)

If you remember when you were first born-again, if you were like most new Christians, you became a sponge, soaking up everything you could to learn about God and His spiritual world.

When a baby is born in the natural, the infant’s five senses may work perfectly, but the child must learn what the input from those senses means. A baby isn’t born knowing some things it sees are people, others furniture, and still others walls, doorways, or parakeets.

Neither is a baby born with depth perception. If you have ever held a newborn, you will notice its head and eyes wander randomly around as the child’s brain begins the process of distinguishing one thing from another.

A newborn infant doesn’t know what to focus on.

The first thing a baby learns is to focus on the face of the person holding him or her as that person coos and caresses his or her cheek.

Babies learn to focus on their mother’s face as they suckle, or their father’s as he rocks them to sleep. They learn to distinguish noises from voices and words from gibberish. They learn what cries to make to gain attention and what gurgles to make to receive smiles and affection.

It is a process that takes months and comes slowly, but the more the baby interacts with his or her parents, the faster he or she learns to know them.

Is it really any different when we are born spiritually?

Eventually babies are expected to learn real words to get what they are after; they cannot cry and think they will be given what they want.

They must understand the words “no” and “don’t” to avoid the things that might hurt them. They are expected to learn to obey instructions and recognize the voice of their parents over the voices of the world around them.

As they learn to walk and move about on their own, they enter the world of “toddlerdom.” They learn the power of willfulness and the rewards of obedience.

This is the phase spiritually where I believe the vast majority of Christians get stuck and stagnate.

Most of us have witnessed a toddler throwing a tantrum on the floor because the child didn’t get what he or she wanted.

Children do this because they remember crying out when they were only a few months old and seeing help come immediately. But when a child does this at three years old, crying doesn’t achieve the same response.

It is time for the child to grow up a little…

Even though the parents or caregivers probably know intuitively what the child wants, they cannot respond to the cries of a three-year-old in the same way they did for a three-month-old.

The process is gradual, but the relationship between parent and child must change over time if the child is ever to become a successful, contributing member of society.

“The Lord disciplines those he loves, as a father the son he delights in.”
Proverbs 3:12

No matter what great plans a parent has for their child, if a child never gets past kicking and screaming thinking the entire world is centered around him, he will never fulfill his potential.

That is the place I believe most of the Church is today.

This is why we haven’t yet learned to distinguish the voice of God from the voices of the rest of the world. We don’t want to grow up and separate ourselves from the things that are holding us back.

We crave our own satisfaction and comfort more than we crave the voice of God.

Do you ever find yourself wanting all of the rewards of being a child of God, yet often not willing to take the time to pursue His presence, listen for His voice, or study His Word?

And that is why I have written The Prayer Warrior’s Way.

I encourage you this Father’s Day to honor your father by spending time enjoying his presence—and really listening to him. You’ll be glad you did, and so will he.